We know that the Drill Hall did not look like it does now at the time it was built, but finding a full picture of the original front feels rather like the search for the Holy Grail.

One image comes from Sidmouth Museum, and they hold the copyright, I am very grateful that they allow me to reproduce it here.
The date it was taken is unknown, the only clues are that it is after the level of the road has been raised ( they are standing on the pavement on a level with the door ) and before the name changed from 3rd to 4th Battalion. The Museum has the photo described as being an original from the time of the opening in 1895 but I think this must be a mistake as there is no doubt that it was after the Reading Room opened in Nov 1903. The board can be seen in front of the window at the right.

Many of the rubber brick details mentioned in newspaper reports can be seen here but unfortunately we can’t see the top of the upper oriel window, the clock in the gable end or the ornaments on top of the pillars or the gable.

The other good view of the front comes from John Ankin, it is in his book ‘Sidmouth a history: Jacob’s ladder to Alma Bridge’. He has given me permission to reproduce it here. 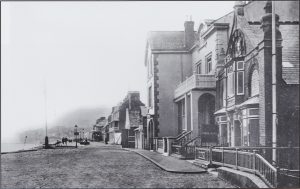 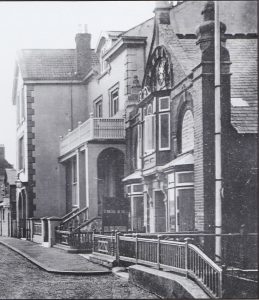 In this detail from Mr Ankin’s picture East Cliff House is the building on the left with the Drill Hall on the right.

When this image of the Drill Hall is viewed in conjunction with the one from the Museum then the picture becomes clearer. However, the detail of the top of the gable is not present and we can not see the front door. Other details still remain unclear.

April 2017 saw me find two new photographs of the front in the records of the British Newspaper Archive. The copyright of these belongs to the British Library and the newspapers concerned. Printed pictures are always difficult to see clearly but I have done my best to bring out their potential.

From 1907 we have the Volunteer Bazaar photograph in the Exeter and Plymouth Gazette. In the bottom right hand corner Brigadier-General Lord Clifford is shown pinning a Long Service Medal on the breast of Sergeant-Instructor Pitt.

Again both these new images help clarify some details but also create some misleading impressions which need correcting by reference to other images.

If you can track down a full, real photograph, view of the front you will be hailed a hero!